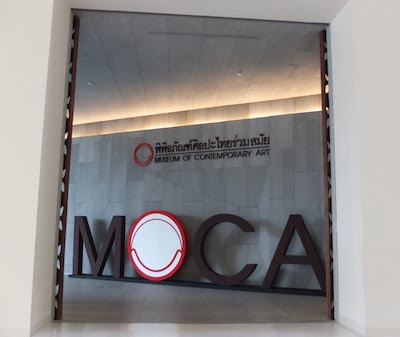 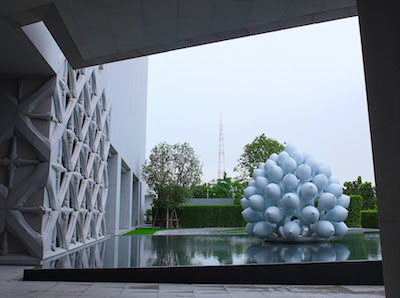 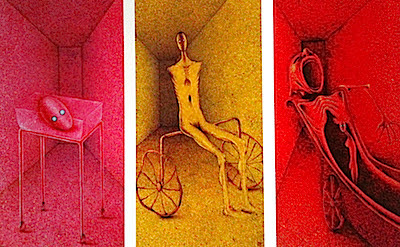 The Museum of Contemporary Art opened in Bangkok earlier this year. The six-storey Museum is an imposing granite building, and feels appropriately like a Modernist cathedral for art.

MoCA was funded entirely by Boonchai Bencharongkul, founder of the DTAC telecommunications company. Boonchai is also Thailand's leading art patron, approximately equivalent to Charles Saatchi in the UK. Like Saatchi, Boonchai gobbles up new art: with vast financial resources and determination, he doesn't just dominate the local art market, he is the local art market.

Boonchai not only paid for the Museum's construction, he also filled it exclusively with his own art collection, and personally curated each gallery. Highlights include Birth-Ageing-Sickness-Death (a vivid oil triptych of disturbing figures by Kittisak Chanontnart, influenced by Freudian psychoanalysis) and Animal-Man Family (Anupong Chantorn's bronze dogs from his Hope In The Dark exhibition, presumably commissioned by Boonchai).

These are the exceptions, however. The Museum's permanent collection reflects Boonchai's personal taste, and unfortunately his taste is largely traditional. Thus, there is no political art at all, and representation of contemporary life is almost entirely absent. Instead, there are numerous galleries filled with religious and mythological paintings. Also, the collection consists entirely of paintings and bronze sculptures: there is no video art, photography, installation, digital, or new-media art of any kind.

Indeed, much of the collection is not even particularly recent. The ground floor contains works by Silpa Bhirasri from almost 100 years ago, and there's a collection of Victorian-era paintings on the fifth floor. The Museum's name is somewhat misleading, because the art there is largely modern rather than contemporary.

So, MoCA is an impressive building, with an extensive yet traditional art collection. It's like a conservative version of the Saatchi Gallery: a grand showcase for a formidable patron's personal taste.
Tags: art
continued...