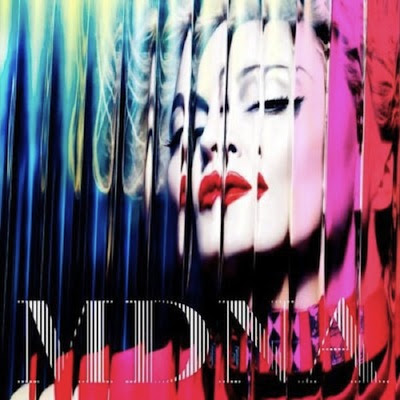 Madonna's new album MDNA includes Masterpiece, a ballad from her film W/E, and Give Me All Your Luvin', which she sang (or mimed) at the Super Bowl earlier this year. Madonna has described the album's title as a triple-entendre. It's a pseudo-blend of her name (with every second letter omitted), it resembles M DNA (i.e. Madonna's DNA), and it's a pun on MDMA (the rave drug). One of the album's producers, William Orbit, previously produced Ray Of Light and remixed Justify My Love.

The album is surprisingly aggressive (Gang Bang) and confessional (I Fucked Up), though it also contains some pure dance tracks, such as the catchy Turn Up The Radio and Love Spent. Masterpiece is a ballad with a weak first line ("If you were the Mona Lisa, you'd be hanging in the Louvre"). Superstar, like the earlier non-album track Superpop, references some of Madonna's heroes ("You're like Brando on the silver screen").

Several songs - notably I Don't Give A and Best Friend - refer directly to her failed marriage, recalling Till Death Do Us Part on her earlier Like A Prayer album. In another link with Like A Prayer, there are numerous references to Catholicism: Girl Gone Wild begins with a confession, and I'm A Sinner includes a list of saints. MDNA represents a real return to form, with the insubstantial B-Day song being its only weak track.

The double-disc track-list is: Girl Gone Wild, Gang Bang, I'm Addicted, Turn Up The Radio, Give Me All Your Luvin', Some Girls, Superstar, I Don't Give A, I'm A Sinner, Love Spent, Masterpiece, Falling Free, Beautiful Killer, I Fucked Up, B-Day Song, and Best Friend. A single-disc version, containing fewer tracks, is also available, and both versions are also available in non-explicit editions.