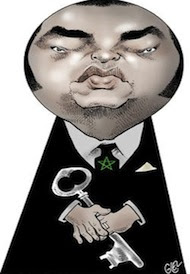 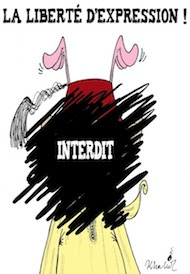 Last Thursday's edition of the Spanish newspaper El Pais has been banned in Morocco, as it contains a caricature of King Mohammed VI. The cartoon, by Damien Glez, was first published in Le Monde in 2009, and distorts the King's head and body into the shape of a keyhole.

Walid Bahomane, a Moroccan man, was arrested after he uploaded the cartoon to Facebook this month. A Facebook group, Mohammed VI: Ma Liberte Est Plus Sacree Que Toi, has been set up in solidarity with him, and now contains numerous King Mohammed caricatures. Persecuted cartoonist Khalid Kadar has drawn a portrait of the King which has been censored with the word "INTERDIT", highlighting Morocco's lack of free expression.

(A previous edition of El Pais was also banned in Morocco for similar reasons in 2009. Other foreign publications - Le Nouvel Observateur this year and last year, Courrier-International in 2009 and 2011, Pelerin this year, L'Express in 2011, and L'Express International in 2008 - have also been banned in Morocco, and the Moroccan newspaper Akhbar Al Youm was closed down in 2009.)
Categories: censorship, media
continued...