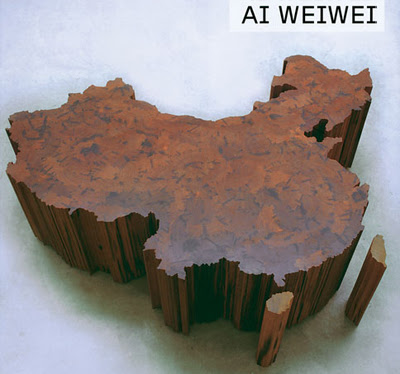 Ai Weiwei, part of Phaidon's Contemporary Artists series, is the first book to explore Ai Weiwei's entire artistic career. Ai is China's most famous artist, and one of the leading names in international contemporary art.

The book features an interview with Ai by Hans Ulrich Obrist, a survey of Ai's oeuvre by Karen Smith, and a profile of Ai's sculpture Descending Light by Bernard Fibicher. Descending Light resembles Vladimir Tatlin's Monument To The Third International, the never-constructed Constructivist tower; it also looks like an enormous red lantern, and the director of Raise The Red Lantern, Zhang Yimou, was a contemporary of Ai's at the Beijing Film Academy.

Phaidon's monograph is a necessary introduction to Ai's background and early work, though Ai is now better known for his political activism. He has become a vocal critic of the Chinese government (unlike Zhang Yimou, who has been accused of producing propaganda), exposing state corruption and cover-ups. He was jailed earlier this year on (presumably trumped-up) tax-evasion charges; he was eventually released, though discussion of his arrest is suppressed and his associates continue to be harassed.
Categories: books
continued...