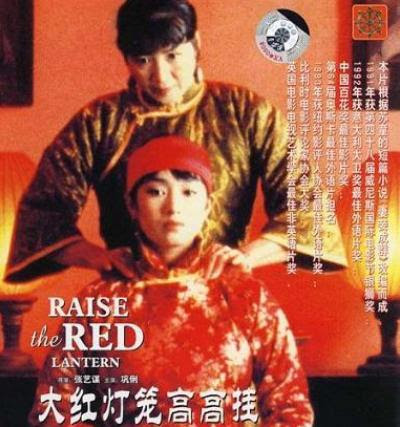 Raise The Red Lantern, directed by Zhang Yimou, stars Gong Li as Songlian, a teenager who becomes the fourth wife (essentially a concubine) of a wealthy aristocrat. Her husband's face is rarely seen, as the film concentrates instead on the relationships between his four wives. Each wife has her own maid and living quarters within the husband's palatial home, though the wives are constant rivals as they must compete for their husband's affections. Each night, he selects a different wife to sleep with, his choice signified by the lighting of red lanterns in the living quarters of the chosen wife.

The older first wife is a matriarchal figure for the other three. The second wife is initially friendly towards Songlian, though the spoiled third wife is jealous at being usurped by Songlian's arrival. Later, it transpires that the third wife is a sad and ultimately tragic figure, and the second wife is memorably described as having "the face of the Buddha but the heart of a scorpion". We sympathise with Songlian, forced to become a concubine after the death of her father, though her callous treatment of her maid is uncharacteristic. Her maid, who dreams of becoming the fifth wife, is also broadly sympathetic, her insubordination arguably excused by Songlian's attitude towards her.

The film has striking similarities with Curse Of The Golden Flower, also directed by Zhang Yimou. In both films, Gong Li plays a wife trapped in a gilded cage, constrained by the rituals and protocols of daily life. Raise The Red Lantern and the director's visually stunning later film Hero both share a bold colour palette, with each sequence dominated by a single colour: in Red Lantern, the bright red of the illuminated interiors is contrasted with the cold blue of the exteriors. Hero emphasised style over content, and Golden Flower was excessively opulent, though Red Lantern perfectly combines profound drama with understated cinematography and expressive lighting.

Red Lantern has been interpreted as a commentary on Communist suppression, though the director (probably because he is now a government propagandist, having directed the Beijing Olympics opening ceremony) refutes this analysis. If the husband's home is seen as a microcosm of Chinese society, the restriction on freedom and punishment of dissent endured by the four wives could be metaphors for state control, and the film was indeed banned in mainland China. Ironically, the film's international success, and the historical exoticism in the director's subsequent work, have become major Chinese artistic exports.
Categories: film reviews
continued...