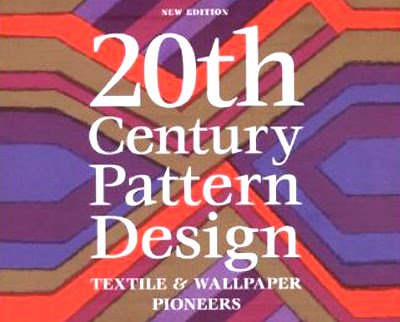 20th Century Pattern Design: Textile & Wallpaper Pioneers, by Lesley Jackson, was originally published in 2002, and an updated edition was issued this year. There seems to be only minimal revision of the previous edition, with no new examples from the past decade, though the comprehensive bibliography has been updated.

The book's chronological survey begins with Arts & Crafts and Art Nouveau, though cultural appreciation of wallpaper and domestic decoration flourished a decade earlier during the Aestheticism movement. ("Modern wallpaper is so bad", the aesthete Oscar Wilde famously observed, "that a boy brought up under its influence could allege it as a justification for turning to a life of crime".)

Jackson's coverage is almost exclusively British, European, and American, and she profiles the key designers and studios of each decade. Her approach is largely ismatic, and she identifies trends such as Functionalism, Ruralism, Revivalism, and (more contentiously) Giganticism. She also links pattern design to the major cultural paradigms of the 20th century: Proto-Modernisn, Modernism, and Post-Modernism.
Categories: books
continued...