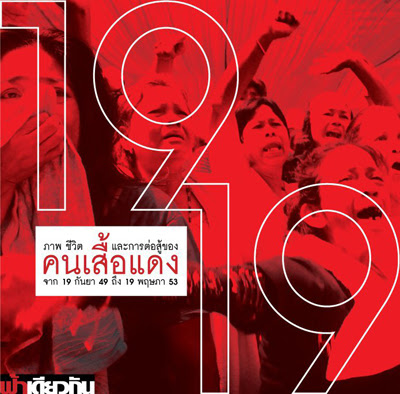 19-19: ภาพ ชีวิต และการต่อสู้ของคนเสื้อแดง จาก 19 กันยา 2549 ถึง 19 พฤษภา 2553 is a photographic record of the pro-democracy demonstrations in Bangkok from 19th September 2006 to 19th May 2010. The book, published by Same Sky, begins with the protesters who marched against the 2006 coup. (Same Sky published a book about the coup in 2007.)

The red-shirt anti-coup movement gained momentum in 2007, with an organised campaign opposing the 2007 constitution. On the other hand, the cause was significantly set back in April 2009, when red-shirt groups started violent demonstrations in Din Daeng. Subsequent red-shirt protests near Democracy Monument in early 2010 were peaceful. Much of the book is devoted to the extraordinary events of May 2010, when red-shirt demonstrators were massacred by the army.

19-19 has a bright red cover and endpapers, so it's clear where the publisher's sympathies lie. Previously, Same Sky has distributed a VCD of the Tak Bai incident (volume 2, number 4; 2004), published the evidence from Da Torpedo's lèse-majesté conviction in Thai (volume 7, number 3; 2009) and English (volume 7, number 4; 2009), and was censored in 2005 after it published an interview with controversial writer Sulak Sivaraksa.
Tags: books, media, politics
continued...