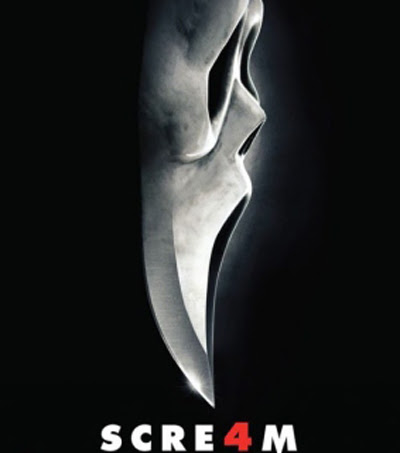 Scream IV (or Scre4m) was directed by Wes Craven and written by Kevin Williamson, as were Scream I-II. (Williamson wrote a treatment for Scream III, though not the script; Craven and Williamson also collaborated, less successfully, on Cursed.) The original Scream was a genre classic, starting a trend for post-modern horror; in Nightmare Movies, Kim Newman calls it "the defining horror film for a generation". (Craven's earlier New Nightmare was equally post-modern, though less successful at the box office.) Scream II was an unusually impressive sequel, though the metafictional self-referentiality in Scream III felt too much like a parody. Since Scream III, Craven has directed the effective thriller Red Eye, one of the better segments of Paris, Je T'Aime, and the shockingly mediocre My Soul To Take.

With Williamson (who also wrote the excellent The Faculty) back on board, Scream IV should have reinvigorated the series. However, there's nothing original here, merely the same old phone calls (once clever, now formulaic) and villain-unmaskings (inviting unwelcome Scooby Doo comparisons). The body count is extremely high, though the large cast and frequent killings mean that characters are given very little back-story, so it's hard to become emotionally involved in their fates. Also, there is little suspense, and each victim is dispatched so quickly, thus the film is never really scary.
Categories: film reviews
continued...