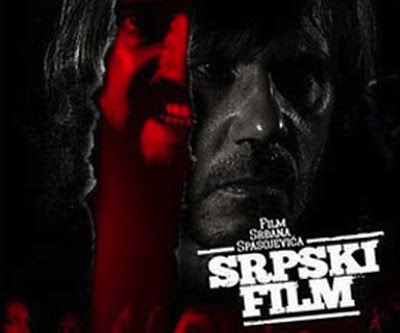 A Serbian Film, directed by Srdjan Spasojevic, is certainly shocking and offensive, though its reputation as sickening and unwatchable is unjustified. Maybe I'm too jaded, after prior exposure to Flower Of Flesh & Blood, Cannibal Holocaust, Cannibal Ferox, Salo, Blood Feast, Ichi The Killer, Aftermath, Irreversible, Men Behind The Sun, Nekromantik I-II, and August Underground's Mordum, but A Serbian Film seems like provocative exploitation rather than a pinnacle of obscenity.

The film is also a bitter, nihilistic political allegory, in which the repressive Serbian government of the 1990s (notably the genocidal President Slobodan Milosevic) is represented by a 'snuff' movie director. Snuff movies have become an increasingly common theme in contemporary horror films, ever since the release of the low-budget exploitation film Snuff and, more recently, the mainstream thriller 8mm. The ultimate source of this trend is probably Peeping Tom, a film decades ahead of its time.

A Serbian Film is genuinely transgressive in its juxtapositions of sex, extreme violence, and children, and has therefore become highly controversial. Serbia has a tradition of cinematic provocation, notably Dusan Makavejev's WR: Mysteries Of The Organism.
Tags: censorship, films
continued...