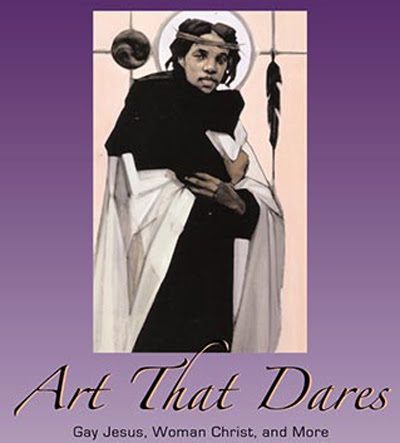 Art That Dares: Gay Jesus, Woman Christ, & More, by Kittredge Cherry, discusses artists who have been censored for their depictions of Jesus as homosexual or (less controversially) as female. Arguably the most provocative artist profiled by Cherry is Alex Donis, whose My Cathedral installation in San Francisco depicted Jesus and the Hindu god Rama kissing passionately; the painting was destroyed by protesters in 1997.

Cherry's book focuses on painting and sculpture, though gay Christs have also appeared in other artistic media: a series of photographs by Fernando Bayone (Circus Christi), two films (Matthias von Fistenberg's Passio and Ed D Louie's He), a poem by James Kirkup (The Love That Dares To Speak Its Name), a lithograph by Enrique Chagoya (The Misadventures Of The Romantic Cannibals), a play by Terrence McNally (Corpus Christi), and a magazine illustration (Johnny Correa's Resurrection, in The Insurgent); also, in Jerry Springer: The Opera, Jesus admits: "Actually, I am a bit gay".