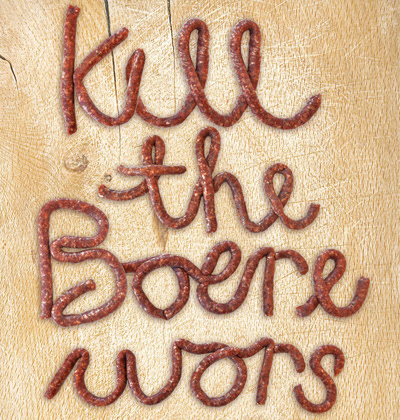 South Africa's High Court in Johannesburg has declared that the apartheid-era song Ayesab' Amagwala is illegal, and that singing the song is therefore against the law. The song's most famous phrase, "dubul' ibhunu", calls for the shooting of white farmers and has become an anthem among young ANC members. The High Court ruling follows a civil case against prominent ANC member Julius Malema, who has repeatedly performed the song in public.

Tara Butchery in Cape Town capitalised on the controversy with a poster announcing "Kill the boerewors", written with sausage meat. 'Boerewor' describes a variety of traditional sausage, though the slogan is also a pun on 'kill the boer', an English translation of "dubul' ibhunu".