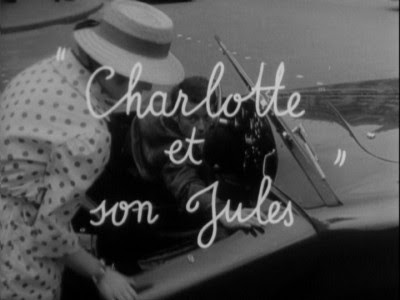 Charlotte & Son Jules, directed by Jean-Luc Godard, features Jean-Paul Belmondo and Anne Collette. Collette plays Charlotte, who returns to her ex-boyfriend's apartment. Belmondo, playing her ex, immediately launches into a monologue which runs for almost the entire length of the thirteen-minute film. The self-pitying Belmondo mocks Collette and implores her not to leave him again; though the conclusion is funny, it's also predictable.

This was the last of Godard's short films, made shortly before his feature debut Breathless. Belmondo would go on to star in Breathless and two further Godard features, A Woman Is A Woman and Pierrot Le Fou. Charlotte & Son Jules was filmed in Godard's hotel room, and Godard himself dubbed Belmondo's voice.
Categories: film reviews, media
continued...