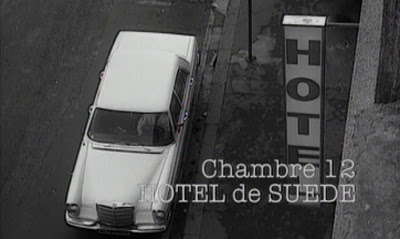 Claude Ventura's documentary Chambre 12, Hotel de Suede, was made for the French television channel Arte in 1993. Ventura checks into room twelve in the hotel's final week of operation: it is demolished the day after he checks out. Room twelve was one of the principal locations for Jean-Luc Godard's New Wave masterpiece Breathless, and Ventura's documentary investigates the production of Godard's film.

Ventura interviews all of the key figures involved in the making of Breathless, including star Jean-Paul Belmondo, cinematographer Raoul Coutard, and 'technical adviser' Claude Chabrol. Chabrol confirms the rumour that he and François Truffaut (director of The 400 Blows, which launched the New Wave) were associated with the film merely to secure financing and distribution: they lent their names to the project because, at that time, they were more famous than Godard. Truffaut, and Belmondo's co-star Jean Seberg, both died before the documentary was filmed, as did producer Georges de Beauregard. Ventura finds an archive of production documents relating to Breathless, including a letter from de Beauregard insisting that Godard adopt more conventional filming practices.

Godard himself declined to be interviewed for the documentary, though Ventura does telephone him twice. Each call lasts for less than a minute, with Godard dismissing Ventura and hanging up. In the first conversation, Godard simply says "Dream on!" when asked to discuss Breathless. When Ventura calls back, asking specifically about the film's final lines of dialogue, Godard says he can't remember. In the Breathless production archive, there are discrepancies between Godard's hand-written dialogue notes and the continuity script, thus Belmondo's last words in the film remain ambiguous: when he says "degueulasse" ('disgusting'), is he criticising himself, Seberg's character, or life in general?
Categories: films, media
continued...