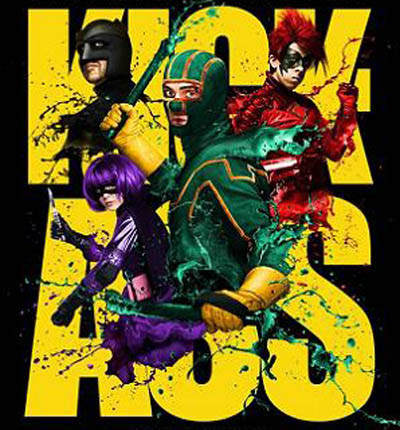 Kick-Ass, directed by Matthew Vaughn, is an action comedy in which a teenager decides to become a real-life superhero. There is a refreshing lack of stars, with most leading roles played by relatively unknown and average-looking young actors. The violent action sequences and comic-book references are rather Tarantino-esque, with Kill Bill presumably a key influence. The arch-villain's HQ is adorned with artworks by Marc Quinn, Damien Hirst, and Andy Warhol.

The character attracting most publicity is Hit-Girl, played by pre-teen actress Chloe Grace Moretz; she is a deadly assassin (like the pupils in Battle Royale), and her use of strong language has provoked controversy in the media. In the Daily Mail, Christopher Tookey even called the film a "crime against cinema", but it's really no different than thirty years ago when child-actress Linda Blair played the violent, profane Regan in The Exorcist.

One word in particular, spoken by Hit-Girl in the teaser trailer for Kick-Ass, was used by an equally surprising character in Legion, also released this month. In that film's most (or only) enjoyable scene, Gladys, who appears to be a sweet old lady, turns into a foul-mouthed demon.
Categories: film reviews, the c-word
continued...