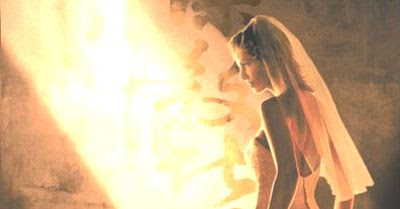 On the plane back to Bangkok, one of the in-flight movies was Quentin Tarantino's Kill Bill II, which I hadn't seen before. I saw Kill Bill I when it was released, though I wasn't overkeen on it because of the constant martial arts. I'm not an especially big fan of kung-fu films, so I didn't go to see Kill Bill II.

Having finally seen it on the plane, I was surprised by how stylistically different it is to the first film. The martial arts elements are much less prevalent, and there's much more of Tarantino's typically witty dialogue. Some of his trademark shots are included, as usual (a low-angle point-of-view: Budd and Ernie looking down at the Bride; a sequence replayed from two different perspectives: Elle driving up to Budd's trailer).

There are numerous references to other films, the most obvious being an homage to Carrie when the Bride's hand thrusts out of the ground as she escapes from the grave. (The version released in Japan contains some additional shots, with almost a minute of extra material.)
Categories: film reviews
continued...