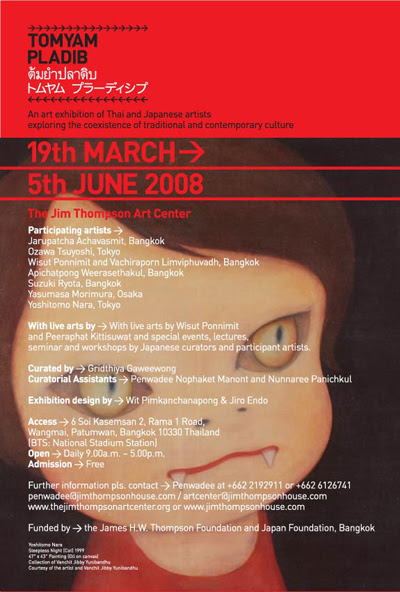 Tomyam Pladib, which opened on 19th March until 5th June, is an exhibition of Thai and Japanese art hosted by The Jim Thompson Art Center in Bangkok. The exhibition features Morakot, a video by Apichatpong Weerasethakul. Morakot is the name of an abandoned Bangkok hotel, and Apichatpong's slow-moving camera films the hotel's deserted rooms filled with (digitally added) floating white feather-like objects. The effect is elegiac, evoking the memories of the hotel's long-departed guests.

Apichatpong discussed his various films and videos in a presentation this evening (Apichatpong On Video Works). He explained the origins of his multi-screen video installations (one of the more surprising sources being Thai melodramas), and played extracts from several of his films. He also screened a few short films in full:

Ghost Of Asia
(a man follows a child's instructions all day, with the action sped up for comic effect; part of the Tsunami Digital Short Film project),