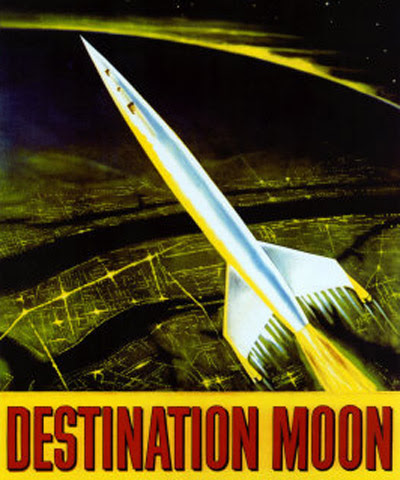 Destination Moon was directed by Irving Pichel and produced by George Pal. Pal's intention was to inject scientific credibility and documentary realism into science-fiction, though the result is a rather boring, uneventful film. A group of engineers build a rocket, fly to the moon, and then fly back again. They don't encounter any aliens, they don't crash, and there isn't even any dramatic conflict. (Some elements, such as the coloured space suits, the procedural details, and an astronaut adrift in space, could have influenced Kubrick's 2001.)

While Pichel and Pal were perfecting their scrupulous accuracy, they were overtaken by a low-budget exploitation film, Rocketship XM, which was rushed into production and actually released before Destination Moon. Rocketship XM has no production values, but it's far more exciting than Pichel's film. Pal later produced the alien invasion film The War Of The Worlds, one of the most dramatic sci-fi films of the period, but it was the success of Destination Moon that revived the genre at the start of the 1950s.
Categories: film reviews
continued...