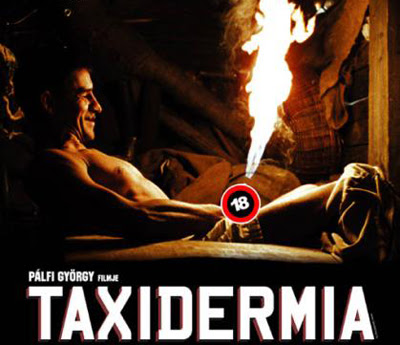 Taxidermia, directed by Gyorgy Palfi, is visually and thematically grotesque. It's full of startling, transgressive images. (Even the poster had to be censored.) It has the potential to be a midnight movie classic in the tradition of the similarly surreal Eraserhead and the equally transgressive/grotesque Pink Flamingos.

There are three sections, about three generations of men from the same family. Vendel is a soldier during World War II, a compulsive voyeur and fantasist. Vendel's son Kalman, an obese professional speed-eater, is the subject of the middle segment. Kalman's son Lajoska, the taxidermist of the film's title, is the final subject.

The initial segment, concerning Vendel, is sensational. The tone is dark and unsettling, and the concepts (Vendel's unique pyromania in the film's opening scene, his corruption of the Little Matchstick Girl, and his lust for a dead pig) are original and provocative. This segment also begins with a diatribe on the phonology and usage of my favourite word (or rather, its Hungarian equivalent), and contains the film's most transgressive images (real sex and death, and ingenious frontal nudity, though the latter is CGI).

Unfortunately, the disturbingly surreal atmosphere of the opening section is not sustained in the second section. The story of Kalman relies too much on pure abjection, with copious vomiting and mastication during eating competitions.

In the final section, Kalman has become a man-mountain resembling Jabba the Hutt (Star Wars) or Mr Creosote (Life Of Brian). Like the speed-eaters of the middle segment, Kalman is ultimately more comical than shocking. However, at the very end, in the film's most disturbing scene, Lajoska disembowels himself with surgical precision and constructs a self-decapitation machine.
Categories: film reviews, the c-word
continued...