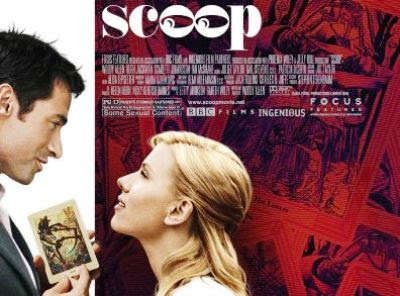 Pransky volunteers to take part in a magic act and, when she is alone in the magician's cabinet, the ghost of a dead journalist (Joe Strombel, played by Ian McShane) appears to her. Strombel passes on a scoop that he was unable to follow up before he died: that aristocrat Peter Lyman (played by Hugh Jackman) may be the 'tarot card killer'.

With the magician (Splendini, played by Allen) in tow, Pransky tracks Lyman down and ingratiates herself with him, searching for clues to prove his guilt. There is, of course, incriminating circumstantial evidence, though as Pransky and Lyman fall for each other she becomes convinced that he is actually innocent.

Scoop is much lighter than Match Point, and this helps the film enormously. Whereas Match Point tried and failed to make serious moral observations, Scoop is content with one-liners and a Manhattan Murder Mystery-style plot. Also, the Londoners of Scoop are more authentic than those of Match Point - there are no unintentional laughs here, unlike the earlier film (though there are still a couple of clunky lines).

Magic has been a regular motif in Allen's films. In Oedipus Wrecks (part of New York Stories), a magician makes Allen's mother-in-law disappear, only for her to reappear as a vision in the sky. In The Curse Of The Jade Scorpion, a fraudulent magician hypnotises Allen and Helen Hunt. In his interview with Stig Bjorkman (Woody Allen On Woody Allen), Allen discusses his childhood interest in magic tricks and cites But We Need The Eggs, a book by Diane Jacobs about the magic in his films.

The Grim Reaper, who appeared in Allen's earlier Love & Death and his acerbic Deconstructing Harry, turns up again here, though this time in a silent role. As the Reaper carries the dead along the River Styx, Strombel swims away to warn Pransky and Splendini. McShane gives a great performance in this bit-part. It's a shame that several excellent actors, such as McShane and Anthony Head (as a police inspector at the end of the film), have such small roles.

The film is generally a lot of fun. There are some great one-liners: Allen says "I was born of the Hebrew persuasion, but I converted to narcissism". Allen's character at times seems like a mouthpiece for Allen himself (as in many of his other films): Splendini explains how much he likes staying in London, and how nice Londoners are, but how he couldn't live there permanently.

The only problem comes at the end, when a series of implausible events takes place: Allen's character dies in almost the same (ridiculous) manner as Bela Lugosi's character in Plan Nine From Outer Space, and it transpires (unconvincingly) that Lyman is a killer but isn't the tarot card killer.
Categories: film reviews
continued...