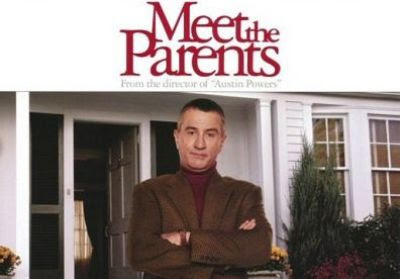 Robert De Niro is one of the greatest American actors since Marlon Brando. His performances in The Godfather II, Taxi Driver, Raging Bull, and GoodFellas are incredible. He parodied his gangster image in the comedy Analyse This (as did Brando, in The Freshman), leading to a series of comedic roles in Meet The Parents and others.

Much of the comedy in Meet The Parents derives from De Niro's intimidation of Ben Stiller, who plays his prospective son-in-law. (Stiller's co-starring role, coupled with a cameo by Luke Wilson, makes this a Frat Pack film, and it's not unlike Wedding Crashers.) Stiller is great as the world's unluckiest man, and De Niro (clearly enjoying himself in the role) is hilarious.
Categories: films
continued...