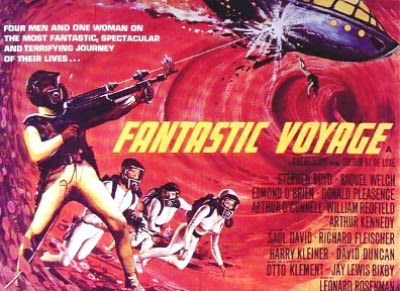 The title was surely inspired by Jules Verne. Exactly a century previously, Verne wrote about fantastical, then-impossible expeditions: Voyage To The Centre Of The Earth and Around The World In Eighty Days. A few years ago, I wrote a paper, Fascination Beneath The Surface, comparing the fictional voyages of Verne to the subcutaneous photographs of artists like Gilbert and George.

Fantastic Voyage is a natural progression from Verne, and it long predates Gilbert and George. (It arguably influenced them because it shows an equally iridescent, abstract view of our insides.) The film shows blood corpuscles as if they were oils in a lava lamp, for instance. Now, endoscopic imaging can place cameras inside a real human body, and Mona Hatoum has turned her own endoscopy examination into video art, coming as close as is currently possible to a documentary version of Fantastic Voyage.

Fantastic Voyage has an incredible concept: the miniaturisation of a team of scientists in a submarine, surgically injected into a man's body in order to remove a potentially fatal blood clot. What is surprising is that it makes no bones about the fact that this concept is all it has to offer. There is only a brief exposition at the start, hinting at a Cold War sub-plot in the vaguest possible terms. The purpose of the miniaturised rescue mission is to remove the blood clot in order that the man can regain consciousness and divulge a state secret, though the film ends abruptly as soon as the miniature scientists emerge from the man's body. We are not told if the man survived, what his secret was, or even if he was able to pass it on, as if the film itself admits that they were merely plot devices to serve the concept.
Categories: films
continued...