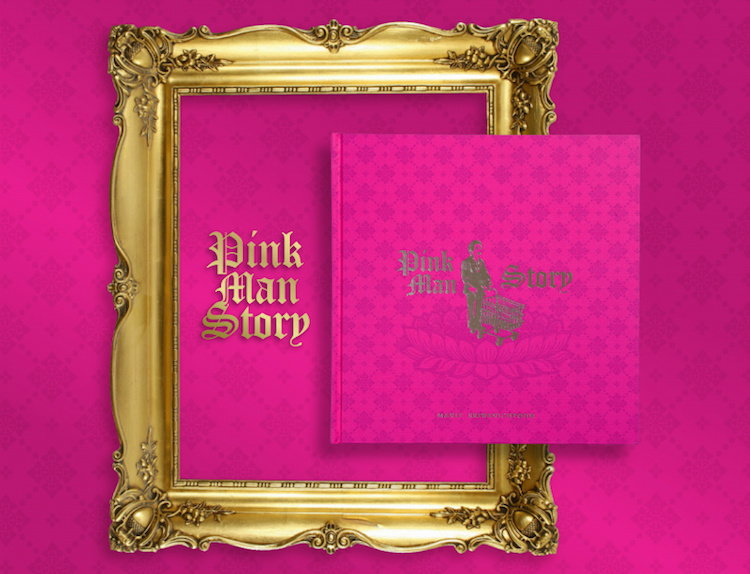 Pink Man Story (พิ้งค์แมนสตอรี่), an exhibition of selected photographs from Manit Sriwanichpoom’s long-running Pink Man (พิ้งค์แมน) series, was due to open today at BACC and run until 16th May. The opening has now been delayed, following the government’s announcement of a shutdown of entertainment venues from 26th April to 14th June due to the coronavirus pandemic.

Each Pink Man photo features the incongruous figure of Sompong Tawee wearing a bright pink suit, a symbol of consumerism and superficiality. For the Horror in Pink (ปีศาจสีชมพู) series, Manit digitally inserted Sompong into news photographs of three massacres from recent Thai history. Horror in Pink was first shown at the History and Memory (ประวัติศาสตร์ และ ความทรงจำ) exhibition, and later at From Message to Media (มองสารผ่านสื่อ) and Phenomena and Prophecies (ท้าและทาย).

The forthcoming exhibition was largely designed to promote a book of the same name: the Pink Man Story catalogue includes a complete collection of every Pink Man image, a (heavily edited) reprint of Ing K’s essay Poses from Dreamland (ท่าโพส จากแดน ช่างฝัน), and an analysis of Horror in Pink by Iola Lenzi. The book was published earlier this week, and the exhibition will open after the lockdown ends in June.
Categories: art exhibitions, Thailand