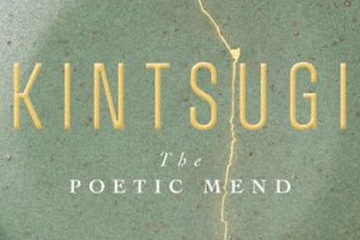 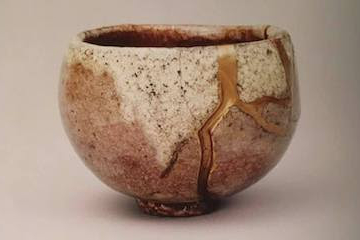 Tomotsugi, the Japanese technique whereby urushi (lacquer) is used as a bonding agent to repair broken ceramics, has been practised for as long as 3,000 years. Archaeological excavations reveal that, rather than attempting seamless repairs, the tomotsugi craftsmen decorated the seams with grit.

Gold dust was later used to further accentuate the urushi seams, a technique known as kintsugi. When silver is sustituted for gold, the process is called gintsugi. Replacing missing pieces with fragments from other vessels is known as yobitsugi, and was first practised by Furuta Oribe. Repaired ceramics decorated with figurative maki-e art, produced for export, were known as makienaoshi.

Although kintsugi has a 400-year history in Japan, it has only gained recognition in the West in the last ten years or so. Most books on the subject reappropriate kintsugi as a philosophy rather than a craft, using it as a (somewhat tenuous) metaphor to represent triumph over adversity: just as kintsugi beautifies a vessel’s imperfections, so we should wear our scars with pride.

Kintsugi: The Poetic Mend, by Bonnie Kemske, is the first comprehensive book on the art and history of kintsugi. Kemske traces its origins to a sixteenth century teabowl—Seppō (‘snowy peak’), by master craftsman Hon’ami Kōetsu—which she describes as “the birth of kintsugi.” She also shows how contemporary Western artists utilise kintsugi techniques. The book is beautifully illustrated, and includes an extensive bibliography.
Categories: books
Dateline Bangkok