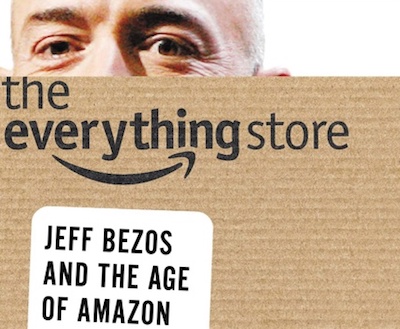 The Everything Store: Jeff Bezos & The Age Of Amazon, by Brad Stone, is the first in-depth account of the rise of Amazon, the e-commerce pioneer that survived the dot-com bubble. In his prologue, Stone summarises Amazon's trajectory: "The company started modestly as an online bookseller and then rode the original wave of dot-com exuberance in the late 1990s to extend into selling music, movies, electronics, and toys... Amazon redefined itself yet again as a versatile technology firm that sold the cloud computing infrastructure known as Amazon Web Services as well as inexpensive, practical digital devices like the Kindle".

Amazon has transformed itself from a retailer into a technology business, though since the book was first published (in 2013), it has also become a media company: it produces original television content, such as The Grand Tour, for its Amazon Prime subscribers. It is now competing with digital giants Google, Facebook, and Apple in artificial intelligence and other areas of consumer technology. (Books about those companies include Googled by Ken Auletta, The Facebook Effect by David Kirkpatrick, Steve Jobs by Walter Isaacson, and Becoming Steve Jobs by Brent Schlender and Rick Tetzeli.)

Stone describes visiting Amazon founder and CEO Bezos "to solicit his cooperation with this book," and while Bezos didn't agree to participate personally, he did authorise his colleagues to speak to the author. Bezos is undoubtedly an innovator, though perhaps not an especially pleasant person. His characteristic "hearty laugh" doesn't necessarily indicate a sense of humour: "the laugh... rocks its targets back on their heels. More than a few of his colleagues suggest that on some level, this is intentional - that Bezos wields his laugh like a weapon."
Categories: book reviews
continued...