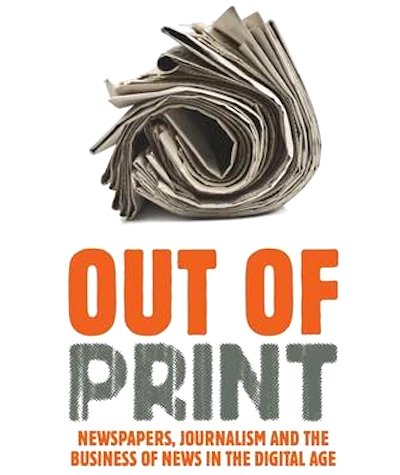 Out Of Print, by George Brock, examines the past, present, and future(s) of journalism. Despite its subtitle (Journalism, & The Business Of News In The Digital Age), the book begins with a history of print journalism since the 1600s. This historical primer provides useful context, though at eighty pages it feels too long in a book ostensibly about digital news, and too short to outline 400 years of news media. (For more background, see Anthony Smith's Newspapers: An International History.)

In his introduction ("from ink to link"), Brock emphasises that "I have tried to ensure that my analysis and argument here is not too Anglocentric", though he does focus extensively on UK media. This contradicts his stated intention, though it makes the book all the more interesting, as Britain has particularly vibrant national newspapers and online news outlets (for example, BBC News, the Financial Times, The Guardian, and MailOnline). This also makes Out Of Print a useful companion to David Folkenflik's Page One, which examines digital journalism from a largely American perspective.

Brock summarises the sometimes unethical practices of tabloid journalism, and the conclusions of the Leveson Inquiry (both of which are also covered by Nick Davies in Hack Attack). Most importantly, he provides an excellent overview of developments in contemporary journalism, including the decline of display advertising, news aggregators (such as Google News), monetisation via paywalls, and the rise of digital-native media companies (including BuzzFeed and Gawker).

As he recognises, these trends are "at risk of being overtaken by events, for we are looking at a fast-moving picture." The book was written in 2013, and since then Gawker has filed for bankruptcy (following Hulk Hogan's privacy lawsuit), The Sun has cancelled its paywall, and Facebook has launched Instant Articles (further blurring the distinction between the technology and media industries).
Categories: book reviews, media
continued...