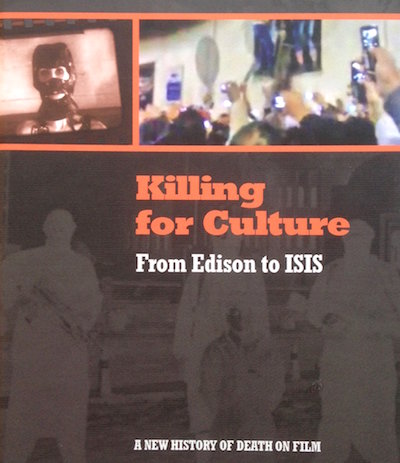 Killing For Culture, by David Kerekes and David Slater, was first published in 1994, and a second edition appeared the following year. The book "explores images of death and violence, specifically moving images, and the human obsession with looking (and not looking) at them" and after twenty years it has been updated in a third edition.

The book discusses the use of 'snuff' films as a plot device in horror films, including Peeping Tom, Slaughter (retitled Snuff), and - in the new edition - August Underground's Mordum and A Serbian Film. It also examines the history of mondo documentaries (from Mondo Cane to Executions) and the representation of real death in the media.

The new edition is over 600 pages long, more than twice the length of the second edition. The most significant addition is its coverage of the internet as a medium for extreme content. (Despite condemning the media for sensationalising horror films, the book quotes extensively from descriptions of violent material in anonymous chatrooms, which is arguably also sensationalist.)

The previous editions were about the myth of snuff, though today snuff films arguably do exist. The new edition, subtitled From Edison To ISIS: A New History Of Death On Film, covers terrorist propaganda videos (hostages beheaded by Al Quaeda and ISIS) and Luka Magnotta's murder video One Lunatic, One Ice Pick.

There are other works dealing with similar topics, such as Sweet & Savage and the Channel 4 documentary Does Snuff Exist? (2006; directed by Evy Barry), though Killing For Culture is the first and most comprehensive study of its subject. (I had to replace my copy of the second edition, after reading it so many times that most of the pages fell out.)

Killing For Culture is a definitive examination of the most extreme films ever made. Kerekes and Slater also wrote See No Evil (an in-depth guide to 'video nasties'); Kerekes wrote Sex, Murder, Art (a monograph on Jorg Buttgereit) and edited the journal Headpress.
Categories: book reviews, censorship
continued...