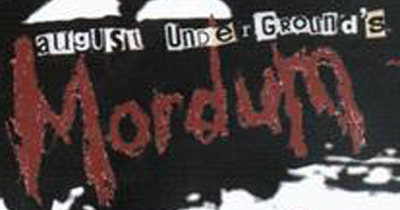 August Underground's Mordum has been called the most violent and disturbing film ever made. It doesn't quite live up to such hyperbole, though it is an extremely uncomfortable film to watch and I can't imagine ever wanting to view it again.

Like Man Bites Dog, Mordum is a serial-killer pseudo-documentary, filmed with hand-held cameras for extra verisimilitude. Specifically, Mordum approximates the style and content of a 'snuff' film, and therefore it consists entirely of protracted torture and murder sequences without any conventional narrative. I have no idea who the target audience is, but most viewers would surely be repulsed by characters (including one who looks and acts like Crackers from Pink Flamingos) who rape their victims and vomit on each other.

There are more violent films than Mordum. Flower Of Flesh & Blood, for example, a fake snuff film from the Japanese Guinea Pig series, depicts a sedated woman being slowly dismembered and decapitated. Also, splatter films such as Braindead contain so much gore that they are hard to take seriously. Mordum does include an evisceration and a castration, though its impact is derived from the sordid atmosphere rather than specific violent set-pieces; its convincing faux-snuff aesthetic makes it more realistic than conventional horror films.