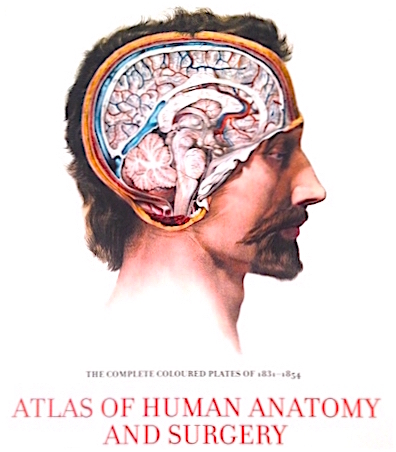 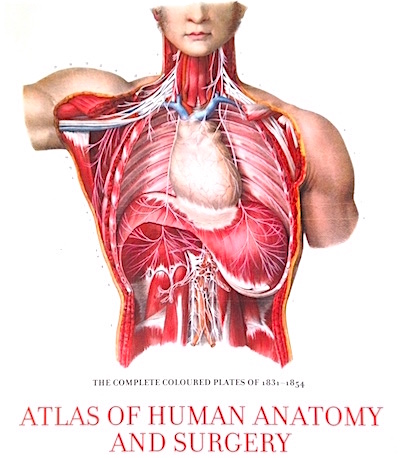 JM Bourgery and NH Jacob's Trait Complet De L'Anatomie De L'Homme was published between 1831 and 1854, issued as a series of unbound fascicles. In Understanding The World, Sandra Rendgen noted that it "remains the most lavishly illustrated anatomical atlas ever produced." This classic anatomical treatise has been reprinted by Taschen in two volumes, as Atlas Of Human Anatomy & Surgery. (It was previously available in a slightly larger fomat.)

As the editors, Jean-Marie Le Minor and Henri Sick, explain in their introduction, the Atlas "represents one of the most remarkable works in the whole history of anatomy". What distinguished the Atlas from earlier anatomical works was the scale of its illustrations: it had 725 plates, ten times more than its predecessors. The Atlas was also significant for its use of colour: the plates were initially hand-stencilled, though the second edition was (like The Grammar Of Ornament by Owen Jones) an early example of chromolithography.

Leonardo and Michelangelo both dissected corpses and made detailed anatomical drawings, though the first and most significant anatomical publication was De Humani Corporis Fabrica, by Andreas Vesalius (published in 1543, the year of Copernican heliocentrism). The editors of the Atlas describe Vesalius's work as "indisputably the most outstanding book in the whole history of anatomy"; his illustrations were reprinted in 1934 and 1950.

The history of anatomical drawing was presented in the exhibition The Quick & The Dead: Artists & Anatomy, curated by Deanna Petherbridge in 1997. (I saw it at Warwick Arts Centre in 1998.) Today, the most (in)famous anatomist is probably Gunther von Hagens, who created the Bodyworlds exhibition of plastinated corpses later imitated by Our Body and The Body Show.
Categories: book reviews
continued...