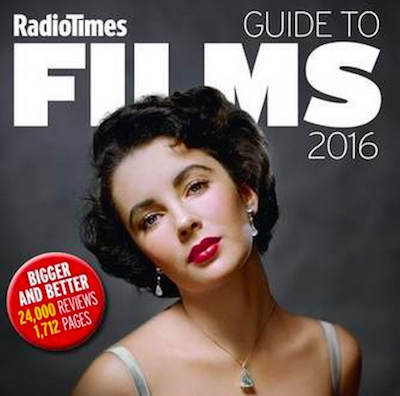 The Radio Times Film & Video Guide (edited by Derek Winnert in 1993, though subsequently withdrawn for plagiarism) was the first film guide I ever bought. More than twenty years later, the Radio Times Guide To Films is now the only annual film guide available. Its last remaining competitor, Leonard Maltin's film guide, ceased publication last year; VideoHound is still in production, though it's restricted to films released on video. (The Virgin Film Guide was last published in 2005, Halliwell's Film Guide in 2008, and the Time Out Film Guide in 2012.)

Instead of scaling back on print in favour of online content, this year's Radio Times Guide To Films (edited by Sue Robinson) is even bigger than last year's, with almost fifty extra pages. The new sixteenth edition includes reviews of 24,027 films, a substantial increase compared to the 23,099 last year, 23,077 in 2013, and 23,068 in 2012. Unlike previous editions, older entries have not been deleted to make room for new ones, though previews of forthcoming films still appear: of the 502 new entries, more than 100 are previews (including Blade Runner II, which is still in pre-production).

Like other recent editions, this year's cover - a portrait of Elizabeth Taylor - again indicates that the Radio Times Guide To Films is aimed at an older demographic, an audience less likely to use online film resources. (Personally, I prefer the Jaws cover from last year.) New entries this year include Interstellar ("this majestic film retains a human heart") and The Interview ("naughty, dumb and patchily funny"), and the "hugely entertaining, refreshingly subversive" Whiplash receives five stars.
Categories: book reviews
continued...