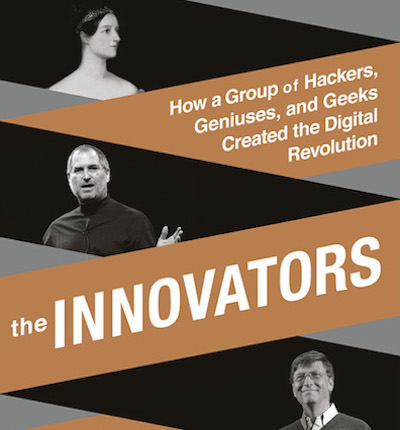 The Innovators is Walter Isaacson's (potted) history of computing and the internet. Each chapter explores a particular aspect of digital technology: the computer, video games, the internet, the PC, the web, etc. (though not social media). Isaacson's focus is on the gestation and birth of each innovation, and the primary innovators responsible, rather than a comprehensive survey of every subsequent development.

Therefore, this is a book about pioneers and their inventions. They include Alan Turing (who theorised a Logical Computing Machine), Steve Russell (creator of Spacewar, the first graphical computer game), Nolan Bushnell (who popularised video games with Pong), Bill Gates (co-founder of Microsoft), Steve Jobs (co-founder of Apple), Tim Berners-Lee (inventor of the world wide web), and Larry Page (co-founder of Google). The book also recognises the extensive contributions made by women in what is often perceived as a male-dominated field.

Isaacson has interviewed many of the pioneers he profiles (all of the living ones, it seems), and his list of sources includes practically every major figure in digital culture. (He interviewed Steve Jobs extensively for his acclaimed biography in 2011; in The Innovators, he states plainly what he merely implied in the biography: that Jobs "filched the [GUI] concept from Xerox".) A History Of The Internet & The Digital Future, by Johnny Ryan, covers broadly the same territory as The Innovators, though Isaacson's book benefits from its author's unrivalled access to the key players involved.

The Innovators (subtitled: How A Group Of Hackers, Geniuses, & Geeks Created The Digital Revolution) might not be "the standard history of the digital revolution", as its dust jacket predicts. But it's surely the most authoritative history of the eureka moments that transformed computing.
Categories: book reviews
continued...