Moments That Made The Movies 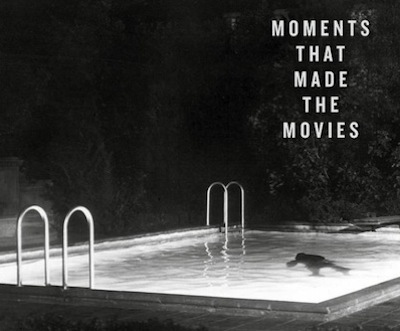 In his new book Moments That Made The Movies, David Thomson analyses seventy classic film scenes. Each essay is accompanied by several gorgeous photographs (frame enlargements, rather than publicity stills). For film lovers, of course, this is a wonderfully evocative book. The obvious classics (Psycho, Casablanca, Citizen Kane, The Searchers, etc.) are all included, along with a few esoteric choices. As Thomson explains in his introduction: "There are surprises, offbeat choices, perhaps even capricious or provocative selections, as well as plenty of films that you might have guessed would be included - though not always with the moments you anticipated".

Thomson previously wrote A Biographical Dictionary Of Film, Have You Seen...?, The Moment Of Psycho, and The Big Screen. He was the screenwriter for the documentary Gone With The Wind: The Making Of A Legend, and a contributor to 39 Steps To The Genius Of Hitchcock. He wrote a short History Of The Movies In Four Parts for the Wall Street Journal last year, and he also writes regularly for GQ magazine.