Snow White & The Seven Dwarfs
The Creation Of A Classic 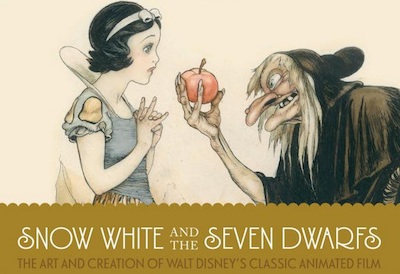 Snow White & The Seven Dwarfs: The Creation Of A Classic (subtitled The Art & Creation Of Walt Disney's Classic Animated Film on the jacket) is the catalogue of an exhibition held at the Walt Disney Family Museum in California last year. The book was written by JB Kaufman, who is also the author of The Fairest One Of All.

The catalogue contains around 200 examples of Snow White production art, though it doesn't feel quite as substantial as The Fairest One Of All. In fact, the strengths of Kaufman's other Snow White book unfortunately don't apply to the catalogue. Also, the catalogue falls into several traps that the other book avoided: chapters titled Collecting The Magic and Celebrating Walt's Genius are too close to 'magic of Disney' studio propaganda.
Categories: art exhibitions, book reviews
continued...