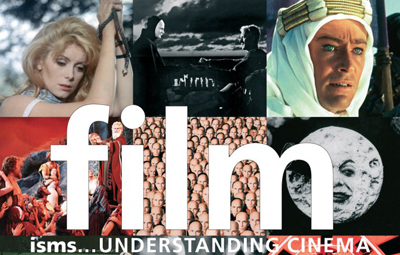 Film Isms: Understanding Cinema classifies film history into a series of categories, all suffixed by '-ism'. This approach was adopted successfully by the first book in the ...Isms series, Understanding Art, because modern art has fragmented into numerous isms. (Other books in the series include Understanding Architecture; Manifesto and Styles, Schools, & Movements, unrelated to this series, are more extensive studies of artistic isms.)

Unlike art, cinema is more suited to classification by genre than by ism, though Film Isms (written by Ronald Bergan, co-author of 501 Must-See Movies) takes "an 'ismatic' viewpoint" that awkwardly converts genres into isms, coining such bizarre neologisms as 'Horrorism', 'Film Noirism', 'New Wavism', etc. These incongruous labels are unfortunate distractions, obfuscating rather than simplifying their subject-matter, and are thus counter-productive in a book that purports to provide a concise and accessible summary of film history. Also, Bergan's definition of Orientalism is simply incorrect, and the appendices are too short to be useful.

Finally, the book's title punctuation is unclear. Film Isms... appears on the cover and title page, while Film...Isms appears on the spine and flaps. ...Isms: Understanding Cinema would be more consistent with the other titles in the series. Bergan's previous book Film is a better beginner's guide to cinema history, and 1,000 Films To Change Your Life is a better thematic guide to great films.
Categories: book reviews
continued...