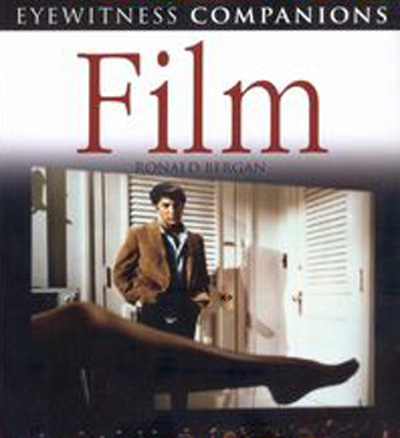 Film, by Ronald Bergan, is a single-volume introduction to cinema history, as part of Dorling Kindersley's Eyewitness Companions series. Within its 500 pages, it includes a decade-by-decade history of the cinema, an explanation of the film production process, chapters on each film genre, film production in each major country, profiles of 200 key directors, and reviews of 100 significant films.

Each of its five sections (history, production, genres, countries, directors, and films) really deserves its own book, and indeed such books exist. Strangely, however, Bergan provides no bibliography or further reading guide at all, which is disappointing because, although his book is a perfect introduction to film for young people, as their interest develops they will be inspired and grounded by Bergan yet will naturally want to seek out more specialist material.

Reductivism is inevitable in any book with this ratio of size to scope, but each section does adequately summarise the key points, providing a broad overview for novice film fans. The section on film production is useful as it provides a more practical approach than most introductory film guides. The section on genre surprisingly finds space for categories which are often overlooked in other genre summaries. The world cinema section is less all-encompassing, with some countries (including Thailand) reduced to brief paragraphs in a general introduction instead of receiving their own individual chapters.

There is almost no cross-referencing, which is a pity, and the photo captions are often overly literal or redundant. There is a detailed index, though it has some omissions. There are also a few mistakes: at one point, for instance, Bergan refers to "Pierre and Auguste Lumiere" (Auguste's brother was called Louis). I would also quibble with some of Bergan's opinions: he describes Salvador Dali's contributions to Luis Bunuel's early films as "invaluable", which seems to massively over-rate Dali's cinematic work, and he claims that the remake of The Mummy "benefits from" (rather than suffers from) the use of CGI. Three times, Bergan describes Kubrick as "anti-militarist", which ignores Kubrick's fascination with war. In an appendix, Bergan oddly (and incorrectly) lists Our Daily Bread as joint 10th in a reprint of Sight & Sound's 2002 critics' poll, even though it received only a single vote.

I've never been quite certain who DK's books are aimed at. They state that they publish educational, illustrated reference books for both adults and children, but to me all of their books seem more suited to younger people. Their educational tone, large fonts, glossy paper, and copious photographs (as distinct from figures or plates) give the impression of children's textbooks. For instance, DK's The Look Of The Century, by Michael Tambini, was one of the very first books on visual culture that I ever bought, and I still have it today; but, although I bought it when I was a teenager, I couldn't imagine buying it now, at twenty-nine.

The book that Film most resembles is The Virgin Encyclopedia Of The Movies, by Derek Winnert, which was published at the height of cinema's centenary celebrations but which is now out of print. That book was an excellent introduction to cinema for any young person who is starting to develop a serious interest in film, and Bergan's book serves a similar purpose.

Bergan concludes with a chronological list of Top 100 Movies, limited to one film per director. (Although there are technically 104 films because Three Colours and The Lord Of The Rings are both trilogies, and this also violates the one-film-per-director rule.) Who exactly selected the 100 films is unclear: Bergan is the book's credited author, though he introduces the Top 100 Movies as "the films we have chosen".

The Top 100 Movies are as follows:Note that The Maltese Falcon is the John Huston version, which is actually a remake of an earlier (and inferior) Roy Del Ruth film. Also, Some Like It Hot is the 1959 comic masterpiece, not the obscure 1939 comedy.
Categories: book reviews, film lists
continued...