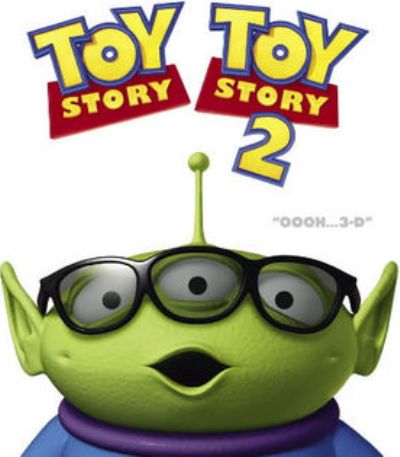 Toy Story, Pixar's first feature-length animated film and the world's first computer-generated feature-film, has been rereleased with its sequel, Toy Story II. Both films have been converted into 3D in anticipation of the forthcoming Toy Story III.

As in many of the retrofitted 3D films (such as Alice In Wonderland and Clash Of The Titans), the minimal 3D barely justifies the inflated ticket price. For a fully immersive stereoscopic experience, the film needs to be made with 3D cameras (like Avatar). The bright CGI animation in Toy Story certainly looks great in 3D, but of course it also looks great in 2D (as does Avatar).

The first 3D cycle came in the 1950s, with science-fiction films such as Creature From The Black Lagoon, and even Alfred Hitchcock was cajoled into adopting the format (for Dial M For Murder). However, the gimmick lasted for only a few years, and the current 3D craze, despite heavy promotion from the major studios, could also be merely another fad.

Toy Story in 3D is still a funny, thrilling, and touching film. Children can enjoy the action scenes and toy characters, while their parents can appreciate the movie references: Sid quotes Darth Vader from Star Wars ("Where is the rebel base?"), Sid's carpet is the same as the Overlook Hotel carpet in The Shining, the rolling globe resembles the boulder from Raiders Of The Lost Ark, and Woody's head turns a complete circle like Regan's in The Exorcist. My only gripe is that the human characters are animated so unrealistically compared to the toys and backgrounds. John Lasseter, who directed Toy Story, also made Cars and co-directed Toy Story II, and is now an executive at Disney.
Categories: film reviews
continued...