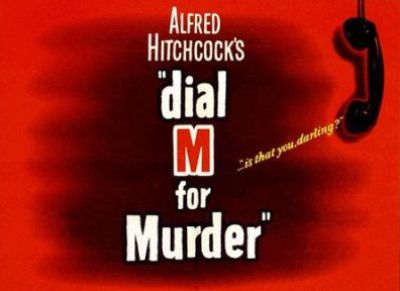 Dial M For Murder is a fascinating, though not premiere league, Alfred Hitchcock film. It was adapted from a play of the same name, and is classic Hitchcock material: the suave villain (played by Ray Milland) has hints of Charlie in Shadow Of A Doubt and Vandamm in North By Northwest, and the plot, involving a pact to murder a man's wife, is similar to Strangers On A Train.

The wife in question is Grace Kelly, the archetypal 'Hitchcock blonde'. Kelly worked with Hitchcock three times, on Dial M For Murder, Rear Window, and To Catch A Thief, and, of these, only Rear Window is truly outstanding, yet she has since become synonymous with the director's preferred female character: a blonde woman with a cool exterior and passion beneath the surface. It could be argued that, with his subsequent moulding of actresses (such as his total control over Tippi Hedren), he was attempting to recreate the Grace Kelly look (in the manner of Scottie in the quasi-autobiographical Vertigo).

In Dial M, Kelly wears pure white with her husband and bright red with her lover - a literal scarlet woman. As the film progresses and her plight increases, her clothes become increasingly plain. This choice of symbolic costumes was later echoed in Psycho, as Marion first appears in a white bra, though after she steals $40,000 she is seen in a black bra representing her loss of innocence.

Like Rope and Rear Window, Dial M's action is confined almost exclusively to a single apartment. It is one of Hitchcock's most theatrical films, with little attempt at innovative camera movement or montage. This style was dictated by the cumbersome 3D cameras used for the film. Hitchcock had no interest in 3D, though after the success of Bwana Devil, and with TV reducing cinema audiences, the studio requested that Dial M be a 3D film. Perhaps they wanted to lend credibility to the gimmicky format, which had previously been utilised only for cheap exploitation films.

Certainly, Dial M was one of the few prestige 3D productions. (I have only seen the 2D version, however.) Hitchcock framed the actors behind props such as lampshades and railings, to give a stereoscopic illusion of depth, and, during the murder scene, Kelly's hand reaches out into the audience in a dramatic 3D shock effect.
Categories: Alfred Hitchcock, film reviews
continued...