Creature From The Black Lagoon (2D) 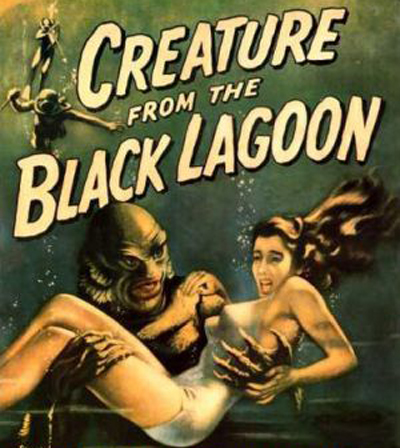 Creature From The Black Lagoon, directed by Jack Arnold, is one of the most iconic of all science-fiction films. It may not have the visual spectacle of Metropolis, nor the philosophical insight of 2001, but it does have a red-blooded, web-fingered, amphibious gill-man.

The eponymous creature, an evolutionary missing link, is discovered in an Amazonian lagoon by a team of scientists. As their fact-finding expedition progresses, the creature kills the more expendable of them and abducts the film's token female love-interest. The film itself is also a missing link, half-way between King Kong (a primitive monster capturing a distressed woman) and Jaws (a small group in a boat, attacked by a deadly marine animal).

The film was originally released in 3D, like Jack Arnold's previous It Came From Outer Space, which the underwater photography (including a lyrical pas de deux, directed by James C Havens) takes full advantage of. The above-water scenes are more routine, with repetitive, melodramatic music cues and a predictable plot preventing any genuine suspense or surprise. It's great fun, though.

Arnold also directed a sequel to this film, Revenge Of The Creature. His most interesting sci-fi production of the period is the existential The Incredible Shrinking Man.
Categories: film reviews
continued...