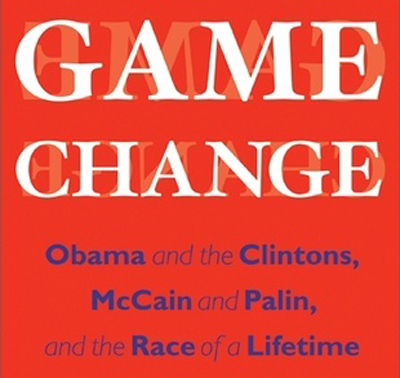 Game Change: Obama & The Clintons, McCain & Palin, & The Race Of A Lifetime (also published with the more manageable title Race Of A Lifetime: How Obama Won The White House), by John Heilemann and Mark Halperin, is a journalistic account of the 2008 American presidential election campaign. Like Andrew Rawnsley's The End Of The Party (which covers contemporary UK politics), Game Change benefits from hundreds of senior yet unattributed sources.

The book's overall tone is rather gossipy, though it contains numerous revelations. While Barack Obama is certainly an infinitely better President than John McCain would have been, McCain was an amusing presidential candidate during the campaign (with hilarious appearances at the Al Smith Dinner and on Saturday Night Live). Game Change shows that McCain is privately much less entertaining, quoting angry outbursts directed at his wife. Hillary Clinton's aggressive plans to challenge Obama are also discussed, and Sarah Palin is revealed to be even more ignorant than we first thought.
Categories: Barack Obama, book reviews, politics
continued...