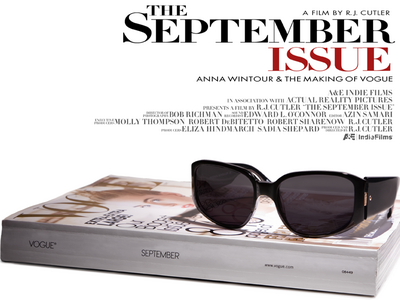 The September Issue is RJ Cutler's fly-on-the-wall documentary following Vogue editor Anna Wintour and her senior staff as they prepare the magazine's September 2007 issue. Wintour was the inspiration for the Miranda Priestly character in The Devil Wears Prada, and The September Issue contains little that will soften her public image - even an initially sweet scene with her daughter, Katherine, concludes with Wintour encouraging an unwilling Katherine to become a fashion editor. (She seems genuinely supportive of a young Thai designer, Thakoon Panichgul, but that might change once he becomes truly established.)

The film basically confirms our perceptions of Wintour (her instant dismissals of clothes, photos, or comments she doesn't like), though more surprising are the supporting cast of Vogue's editorial staff. The likable, hippyish, down-to-earth Grace Coddington clomps around the office, and has Wintour's fashion instincts plus humour and sensitivity. In contrast, Andre Leon Talley is almost a caricature; with his ridiculous capes and designer towels, he looks like a huge, spangly potato.
Categories: film reviews, media
continued...