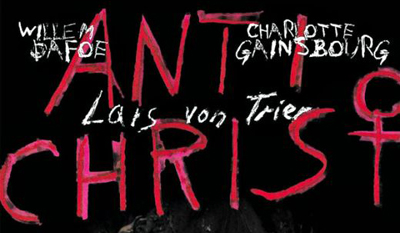 Antichrist, directed by Lars von Trier, is intentionally provocative, occasionally surreal, and ultimately misogynistic. The director also made The Idiots, which scandalised Cannes in 1999, and Antichrist is another Cannes succes de scandale.

The film is divided into a series of chapters, and also includes a prologue and epilogue. In the prologue, which is filmed in slow-motion and black-and-white, a man and woman have sex while their son falls to his death. The man, who is a psychotherapist, helps the woman overcome her grief (though his psychobabble is ineffective), and the couple take a trip to their cabin in the woods. The cabin is called Eden; the names of the protagonists are never revealed, though the Biblical reference is clear enough.

The woman is writing a thesis on gynocide (the systematic murder of women). 'Gynocide' was coined by the feminist writer Mary Daly in her excellent book Gyn/Ecology, though Antichrist is arguably an anti-feminist film. Like Eve, the woman becomes increasingly unsympathetic as a character, most obviously when she (unconvincingly) drills a hole through the man's leg. The film's ending suggests that, as in medieval witch trials, feminine evil must be destroyed.

Though most of the film is shot realistically with hand-held cameras and jump-cuts, there are some inexplicable fantasy sequences involving wild animals, notably a ludicrous talking fox who, in the director's voice, says "Chaos reigns!". There are also three close-up inserts which are included purely for shock value, featuring hardcore sex (as in The Idiots) and female circumcision.
Categories: film reviews
continued...