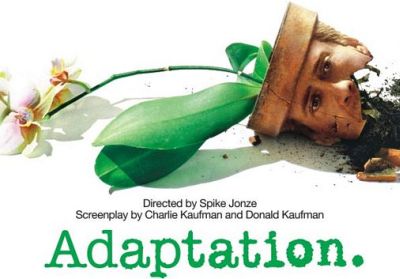 Adaptation was directed by Spike Jonze, and stars Nicolas Cage and Meryl Streep. It was written by Charlie Kaufman, one of the most fascinating contemporary screenwriters (who also wrote Being John Malkovich and Eternal Sunshine Of The Spotless Mind).

Cage plays a character called Charlie Kaufman, a fictionalised version of Kaufman himself. [Subsequent references will be to the character, not the real writer.] Cage also plays Charlie's brother, Donald, who is credited as co-writer of the film, though Donald Kaufman is a purely fictitious character. Charlie is hired to adapt a book, The Orchid Thief, into a screenplay; he hopes to produce a profound, true-to-life script, though he spends months on frustrated false starts. Donald, meanwhile, writes a formulaic thriller screenplay which is immediately optioned. Unable to create a compelling narrative from The Orchid Thief, Charlie decides to follow the book's author, Susan Orlean; surprisingly, her secret (and totally fictionalised) double-life is a far more fascinating screenplay subject, providing the character arcs and suspense that Charlie had dismissed as unrealistic.

Adaptation is incredibly self-referential, recalling films about the frustrations of filmmaking such as 8½ and Stardust Memories, and the novel Tristram Shandy (and thus the film A Cock & Bull Story). The film is not only about Charlie's Orchid Thief adaptation, it is his adaptation, as all of his ideas have been incorporated. His voice-over in which he runs through several potential film openings echoes Woody Allen's opening monologue in Manhattan.
Categories: film reviews
continued...