“A young man 23 years old by the name of Stanley Kubrick...” 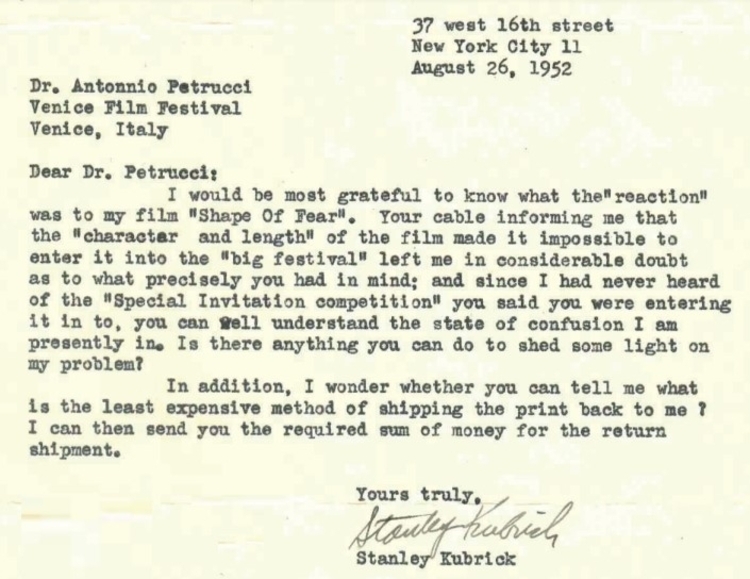 The story behind the premiere of Stanley Kubrick’s Fear and Desire has been published by the organiser of the Venice Film Festival, La Biennale di Venezia. Kubrick’s first feature was shown out of competition in Venice in 1952, after Joseph Burstyn recommended it in a letter to the event’s director, Antonio Petrucci. Burstyn assured him that the film, “made by a young man 23 years old by the name of Stanley Kubrick... could be the great surprise of your Festival.” (He neglected to mention that he was the film’s US distributor: he was lobbying Petrucci, under the guise of a friendly recommendation.)

Petrucci cabled Kubrick, declining to show the film in competition due to its “LENGTH AND CHARACTER”. (Fear and Desire is barely an hour long, and Petrucci may have felt that it didn’t qualify as feature-length.) Instead, he agreed to screen it as part of a sidebar programme, though this prompted a surprisingly indignant reply from Kubrick, who asked for further clarification: “you can well understand the state of confusion I am presently in. Is there anything you can do to shed some light on my problem?”

The correspondence between Burstyn, Petrucci, and Kubrick—posted on La Biennale di Venezia’s website yesterday—was unearthed during research for a new book by Gian Piero Brunetta (author of The History of Italian Cinema), the foremost historian of Italian film. The Venice screening of Fear and Desire, under the working title Shape of Fear, was first reported by James Fenwick in Stanley Kubrick Produces.
Categories: films
Dateline Bangkok