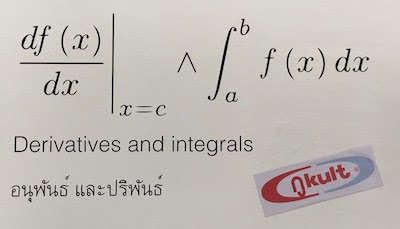 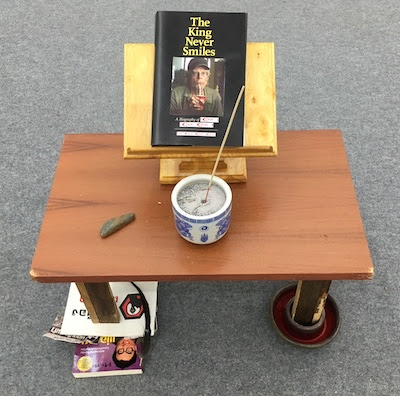 Derivatives and Integrals (อนุพันธ์ และปริพันธ์) opened at Cartel Artspace in Bangkok on 5th March, and runs until 10th April (extended from 28th March). The exhibition includes a copy of the banned book The King Never Smiles on a small Buddhist altar, though the cover photograph has been replaced by a photo of Stephen King. All ‘sensitive’ text on the book jacket has been covered by the logo of the anonymous artist กูKult, whose exhibition this is. (The artist is due in court today, charged under the Computer Crime Act and the lèse-majesté law.)

On closer inspection, the book on the altar is not actually The King Never Smiles: inside the dust jacket is another hardback of the same size, the first volume of Continuous Multivariate Distributions. (Revealing this feels a bit like pulling back the curtains on the Wizard of Oz, though of course that’s also what the exhibition is doing.)

Propping up the altar is another book, a Thai self-help guide, though a simple equation has been written on its cover (one interpretation of which could involve regnal numbers and a gun calibre). The exhibition’s full title is a more complex algebraic expression, \frac{df\left({x}\right)}{dx}\Bigg\vert_{x=c}\wedge\int_{a}^{b}f\left({x}\right)dx.
Tags: art
continued...