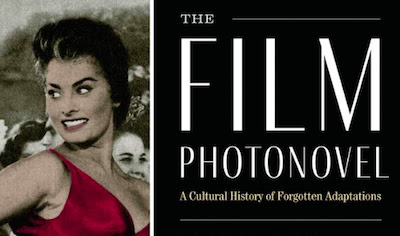 The Film Photonovel, by Jan Baetens, is the first English-language book on the film photonovel and, indeed, on the photonovel itself. As the author explains, and as the book’s subtitle (A Cultural History of Forgotten Adaptations) suggests, the photonovel is a somewhat neglected medium, and—unlike other ‘lowbrow’ media, such as comics and pulp fiction—has yet to be rediscovered by critics or academics. (Baetens is a notable exception, and his journal articles on the subject are invaluable.)

Photonovels (fotoromanzo in Italian) were first published in Italian and French women’s magazines after World War II. (The closest contemporary equivalent is probably Deidre’s Photo Casebook, a photographic agony-aunt column in the UK tabloid The Sun.) Baetens traces the format back to the Italian magazine Grand Hôtel, whose photorealistic drawings he defines as the “drawn novel” genre. Grand Hôtel soon switched from photorealistic drawings to photographs, giving birth to the photonovel.

Like the photonovel itself, the film photonovel (cineromanzo) subgenre also has antecedents. Baetens cites the Italian film magazine Cinevita, which reproduced film stills accompanied by captions providing each film’s complete dialogue. (In the 1970s, Richard J. Anobile edited a series of books with a similar format, including Psycho; and Stanley Kubrick published his A Clockwork Orange screenplay illustrated with hundreds of frame enlargements.)

The first film photonovels appeared in Italy in the 1950s, and they enjoyed significant popularity until their eventual decline in the 1960s. The most successful title, an adaptation of the 1954 film Ulysses, sold half a million copies at the height of Italy’s ‘peplum’ craze. Baetens provides a history of the film photonovel and a detailed analysis of the format’s layout, imagery, and captions.
Categories: books, media
continued...