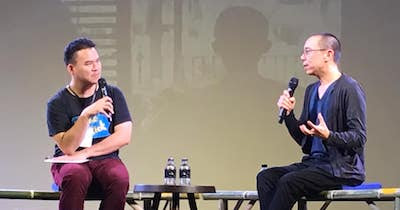 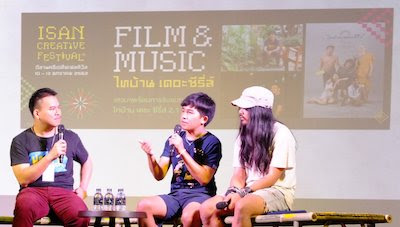 Apichatpong grew up in Khon Kaen, and his most recent feature, Cemetery of Splendour, was filmed in the city. (It's Thai title, รักที่ขอนแก่น, translates as 'Love in Khon Kaen'.) Song of the City, his segment of the portmanteau film Ten Years Thailand, was also filmed in Khon Kaen.

Still in his twenties, Surasak is already one of the most important figures in the Isaan film industry, thanks to the commercial success of his Thibaan comedies. His latest film, Thibaan: The Series 2.2 (ไทบ้านเดอะซีรีส์ 2.2), hit the headlines after shots of a crying monk were censored. It was shown at a free open-air screening last night, along with Ten Years Thailand, on Isan Creative Festival's opening night.
Categories: art
continued...