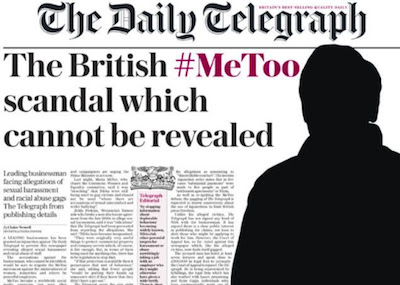 Sir Philip Green has been granted an injunction against The Daily Telegraph, preventing the publication of allegations against him. In a front-page article today, Claire Newell reveals that he made payments to five people who accused him of "sexual harassment and racial abuse". Green is not named in the story, and he is described only in general terms as a leading businessman.

Under the conditions of the interim Court of Appeal injunction, Green's identity cannot be published in England or Wales. Similar high-profile injunctions in recent years have involved Ryan Giggs (who was named by The Sunday Herald in Scotland) and Elton John (whose injunction remains in force, despite the National Enquirer naming him in the US).