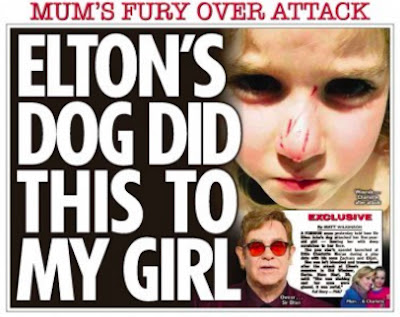 Elton John accepted damages from The Sun yesterday, after suing the newspaper for libel. In a front-page story published on 11th February, The Sun on Sunday alleged that one of John's dogs had savagely attacked a toddler, and that he was not concerned about the victim's injuries. A double-page spread described the victim as "looking like she was attacked by Freddy Krueger" and claimed that she was "yet to receive a phone call from Sir Elton," though his solicitor argued that "the injuries were not serious" and that John had "made several inquiries about the girl's welfare".

The Sun has a history of libellous articles about John, including a previous story that also involved his dogs. On 28th September 1987, the newspaper falsely claimed that he had arranged for his dogs' vocal chords to be removed, in a front-page story headlined "MYSTERY OF ELTON'S SILENT DOGS". On the first day of that libel trial, 12th December 1988, The Sun agreed to a record £1 million damages payment and apologised with the front-page headline "SORRY ELTON". (It was also an injunction against The Sun on Sunday by John and his husband that led to the "PJS" privacy case.)