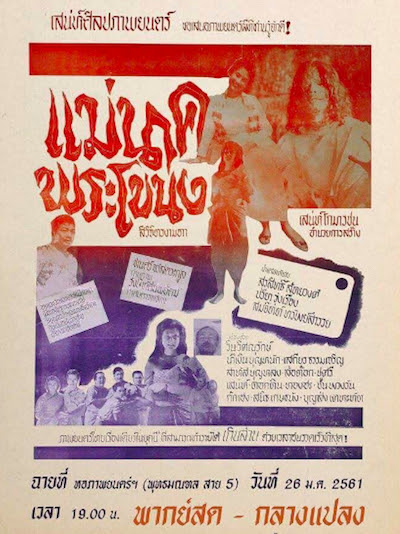 The legend of Mae Nak, the ghost of a woman who died in childbirth, is Thailand's most popular folk tale. (There is a shrine to her just around the corner from my apartment.) She has inspired almost twenty films, including the blockbusters Nang Nak (นางนาก) and Pee Mak (พี่มาก..พระโขนง). (I wrote about Pee Mak and other Mae Nak films in a 2013 magazine article.)

Mae Nak Phra Khanong (แม่นาคพระโขนง), released in 1959, was the first Mae Nak film in colour, and it set the template for all subsequent versions. Like most Thai films of the period, it was a silent production filmed in 16mm. (35mm sound films only became the norm after 1970.) Mae Nak Phra Khanong remained the definitive Mae Nak film for forty years, until the release of Nang Nak.

Mae Nak Phra Khanong will be shown in a free outdoor screening at the Thai Film Archive in Salaya on 26th January. The screening will feature live dubbing, recreating a practice that was common during Thai cinema's 16mm era.
continued...