The Bird with the
Crystal Plumage (blu-ray) 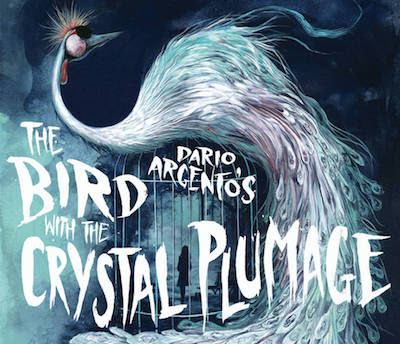 Italian DVD editions of The Bird with the Crystal Plumage were framed at 1.85:1 rather than the original 2.35:1 widescreen ratio. In the US, VCI released it on DVD (in 1999 and 2013) and blu-ray (2015), in the original aspect ratio, though a transfer error cut the first word of dialogue from the line "Right, bring in the perverts." This error was repeated on the Blue Underground DVD (released in 2005) and blu-ray (2011). The Blue Underground releases also used English-language opening titles and closing credits, and replaced the original mono soundtracks with surround sound remixes.

In the UK, Arrow released the film on DVD and blu-ray in 2011, in an uncut print, with original Italian and English mono soundtracks, and both the English and original Italian opening titles and closing credits (via seamless branching). This release also included an audio commentary by horror experts Kim Newman and Alan Jones (also available on the Blue Underground editions). The only flaw in Arrow's release was that the film was reframed to 2.0:1, the Univisium ratio retroactively applied by cinematographer Vittorio Storaro. (Apocalypse Now, also with cinematography by Storaro, suffered from the same issue in all its video versions, until the Full Disclosure edition of 2010.)

Arrow released the film again this year on DVD and blu-ray, this time in the correct 2.35:1 ratio, making their 2017 edition the first definitive video release of The Bird with the Crystal Plumage. This new edition, limited to 4,000 copies, comes in a deluxe package with a poster, lobby cards, and a booklet. It features a different selection of bonus features, and unfortunately the previous audio commentary has been replaced.
Categories: films
continued...