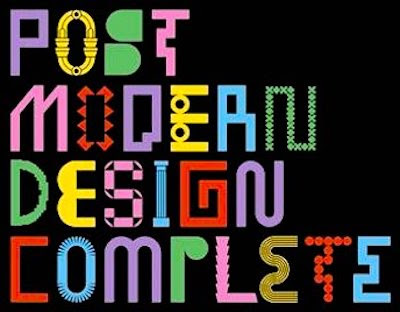 Postmodern Design Complete, edited by Judith Gura, is the latest in Thames & Hudson's series of in-depth studies of twentieth century design movements, after Art Deco Complete and Mid-Century Modern Complete. The book, which will be published at the end of this month, includes sections on postmodern architecture, design, graphics, and interiors.

There are more than 1,000 illustrations, and profiles of designers including Ettore Sottsass ("the figurehead of postmodernism"), Michael Graves, Philippe Starck, and Frank Gehry. The book includes an essay by graphic design historian Steven Heller, who also contributed to Mid-Century Modern Complete.

The Language Of Postmodern Architecture (1977), by Charles Jencks, first popularised the concept of postmodernism, and Jencks writes a foreword to Gura's book. The Victoria & Albert Museum's Postmodernism: Style & Subversion exhibition (2011) led to a revival of interest in the movement, and Gura reprints a Jencks infographic from that exhibition catalogue.

More conventional than the V&A catalogue, Postmodern Design Complete is described by its publisher as "the definitive overview of the movement's seminal years," though its editor is more realistic: "Notwithstanding its title, this book does not presume to tell the complete story of postmodern design, which continues to evolve, but to document its most dominant years." Hal Foster's The Anti-Aesthetic (1984) remains the standard anthology of postmodern theory, though Gura's book is the most comprehensive survey of postmodern design.
Categories: book reviews
continued...